How to Manage Your Anger

Home / Personal Growth / How to Manage Your Anger

“Anger is an acid that can do more harm to the vessel in which it is stored that to anything on which it is poured.”

Sitting in my car for 45 minutes on a Monday morning in bumper-to-bumper traffic for a drive that should have taken 5 minutes was my breaking point. I sat there thinking, “I hate my life right now.” It was a disastrous morning. Everything that could have gone wrong did. My daughter was up all-night teething, my toilet overflowed and flooded my bathroom, and my dog came in from outside and destroyed my floor with his mud and poop-covered paws. At that point I could have snapped at Mickey Mouse. I looked at the car to the right of me trying to cut me off and thought, “Go ahead and try it, man.” My middle finger was ready to go.

All my training, meditation practice, and efforts to be rational disappeared; my centered self was nowhere to be found. As the anger coursed through my veins, it happened: I went from being a rational person to being totally insane. Anger can do that. It can make the calmest person look like the hulk on steroids. When an emotion that powerful rages through your body, it’s easy to lose yourself, your values, and everything you stand for.

The rational and humble part of me understands that the things I was experiencing that morning could have been a lot worse. However, the pile of annoyances, coupled with my lack of sleep created the perfect recipe for me to lose it. I was Dorothy in Oz, confused about what reality I was in, wanting to get back to my world, but not knowing the way. When anger boils in your blood, it’s easy to get swept away from your reality. It wasn’t until I closed my eyes, took a deep breath, and clicked my heels together that I was able find my way to life and myself again.

As most of you probably already know, anger can push us to think and say crazy things. We actually believe we make sense when, in reality, we’re completely irrational. Like a drunk person who doesn’t know when it’s time to stop, anger hinders your judgment and makes you unaware of what’s going on.

That’s because when you’re angry, you’re under the influence of strong chemicals. The amygdala, the part of your brain that initially triggers anger, is one of the most primitive parts of the brain. After your amygdala alerts your body that you’re angry, your adrenal gland kicks into action. Adrenaline is a chemical that increases your heart rate, forcing body contractions and blood flow to your brain and muscles. Your body then starts producing more testosterone, a chemical that kicks your aggression into higher gear. When your body reacts to your rage, it ramps up the intensity by making you even more manic. This is why anger can make you say and do crazy things that don’t reflect the truth of who you really are. Contrary to what people think, anger doesn’t make you speak the truth. It makes you speak from the most primitive part of yourself. Basically, you may get a more rational conversation from a four-year-old than from an angry person.

I know a lot about anger and its consequences, I ran an anger management group for convicted felons. Yes, you read that correctly, little me ran a group for a group of people who had been arrested at one point because of their anger. It wasn’t my favorite job—everyone in the group always seemed so mad about something—but I learned a lot in the process. The number one thing I learned is that it isn’t necessarily the situation that makes us angry but what we tell ourselves about it.

During my time as a facilitator for the anger management group, I heard it all: “He cut me off on purpose! He was out to get me! That’s why I had to pull out my gun.” “She deserved to get punched! She was in my face, waiving her finger and yelling at me.” “He cut me in line. I was waiting, and the jerk just walked right in front of me. I had to push him out of the way.” That’s how the angry thoughts seduce you into acting out and getting you even more enraged—thinking the other person purposely and maliciously did something to you and you had no choice but to retaliate. It makes sense: If you feel attacked, you attack back. However, no one in my group was actually in any danger. The danger was in their thought process. Anger is most likely a result of misunderstanding other people’s actions and assigning our own meaning to them.

When people respond to situations with anger, most likely there’s more to the story. Behind their rage might be a fear of being hurt, a fear of not being able to stand up for themselves, or a fear of unjust or unfair things happening. These are all reasonable feelings. However, when those rational feelings are expressed through anger, the situation can become worse.

Since anger can lead to aggressiveness, it’s important to try to tap into your rational mind when you start to feel yourself getting angry. The goal is to learn how to self-soothe and self-regulate, working with the distress and negative feelings that are fueling the anger. Work on talking yourself down versus working yourself up. For example, when someone cuts you off in traffic, instead of assuming “He saw me and must have done that on purpose!” think to yourself, “They must not have seen me, or maybe they had a long day. It’s nothing personal to me.”

It’s important to remember that anger is a normal human emotion, and when it is managed properly, it isn’t a problem. It only becomes a problem when you lose yourself in it. I was frustrated that Monday morning because things didn’t happen the way I wanted them to and people didn’t behave the way I thought they should. This led to negative emotions that I could have responded to negatively if I didn’t give myself enough time to talk myself down and cool off. You may be feeling hurt, frightened, disappointed, worried, embarrassed, or frustrated but express those emotions as anger. That is what I found with the members of my anger management group: All of their emotions were being expressed only as anger. When we look within ourselves, we can see what is really behind our anger. And we can learn to express ourselves differently when we accept that it’s okay to be vulnerable. Below are tips for managing your anger in everyday life:

Get a copy of my popular book “Its Within You.” It is a guide to help you to live within and cultivate your sense of purpose. https://amzn.to/2LP2pNL 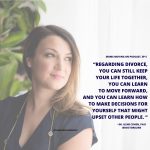 Yes, A Relationship Change WILL Create Anxiety. Here’s How to Handle It with Dr. Ilene Cohen, Ph.D.

Managing Your Anxiety During Anxious Times